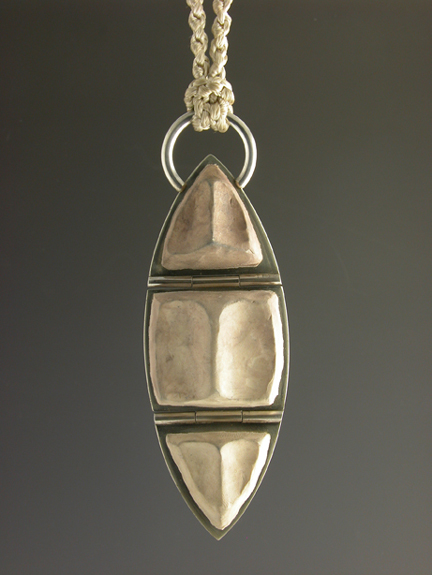 John Myer’s response to our request for information for his member spotlight was a very modest one. “I feel that there are more deserving members to be spot lighted than me.” What he didn’t consider in that answer was how important his contributions to MSG have been recently. A current MSG board member, he has spent the last 4 years working hard as our web master, and facilitating all of our communication needs. That is pretty deserving of some recognition.

Everyone’s story of how they came to metalsmithing is often unique and John’s is no exception. “Well the answer is really a two part answer. First, believe it or not, came from watching reality television shows like “American Chopper.” They would from episode-to-episode design and fabricate a different motorcycle. To me this seemed to be one of the best jobs anyone could ever have. This led me to search for a vocation where I could design and fabricate a product.

The second part came about by attending many art shows and fairs. At these shows you usually see many people selling their jewelry. This led me to the desire to study silversmithing/metalsmithing. Another observation of mine was intarsia, the art of combining different woods or stones into a pattern or even a picture. You see examples of this in the jewelry work of the Zuni, Native Americans. This led me to the study of lapidary, cutting of stones.”

The first class John took was in 2010 at Oakland Community College. “I had trouble finding somewhere to study metalsmithing. I had been an IT Developer since 1985 and was not going to go college full time. However, I was able to find that Macomb Community College had a Jewelry Trade Certificate Program, which I attended and completed in 2011. I have also attended numerous weeks of classes at William Holland School of Lapidary, where I studied metalsmithing, lapidary and scrimshaw. I have studied at Birmingham Bloomfield Art Center and taken workshops at Armstrong Tool and Supply.

My favorite class, classes actually, were with Chuck Bruce where I learned exactly what I wanted to learn from the very beginning, silver inlay. My goal from almost the beginning was to make an intarsia cuff bracelet. So, I would have to say setting stones in a cuff bracelet is my favorite technique.” It was the technique he used to create his favorite piece, a sterling silver cuff bracelet inlaid with black obsidian and wavellite.

John has been a member of MSG since September of 2016.

John’s work is done primarily for his own enjoyment, but he has sold a few pieces, done some custom pieces, and has donated work to William Holland for auction.