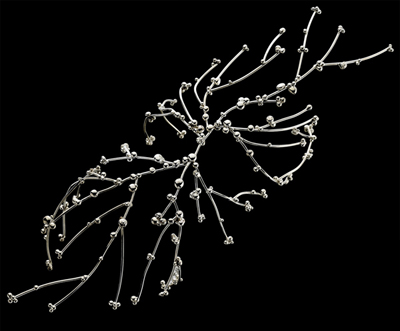 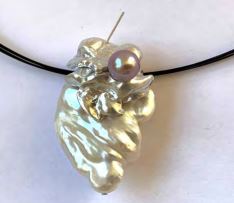 I’ve always worked with my hands – as a child modeling clay and drawing, macramé in the 70’s, and then moving on to beaded necklaces and wire-wrapping.

In 1980, I met and married Don Allen, a local goldsmith who had worked for such notable local jewelry stores as Abracadabra and Matthew Hoffman. I watched over his shoulder for many years, mesmerized by his skills at turning metal into beautiful, wearable objects.

In early 2000, we decided to combine talents and embarked on a new chapter of our lives that focused on making jewelry and selling at art fairs. We did fairly well for several years, creating lovely beaded pieces embellished with Don’s fabulous connections and settings, and traveling as far as Minneapolis, St. Louis, Asheville and Montauk. But in 2008, Don developed respiratory issues from his 30 years on the bench and retired from jewelry manufacture. Without my talented husband’s contributions, and dissatisfied with the manufactured findings available, I decided to take a metalsmithing class at EMU to learn how to manipulate metal in hopes of making my own. I was hooked! I continued to take classes, and in 2014, obtained an MA in metalsmithing.

Throughout this time, I also took numerous workshops with locally and nationally known jewelers and metalsmiths, including fold-forming with Cynthia Eid, anticlastic and synclastic forming with Michael Good (I took this twice!), tessellation with Julia Woodman, stone setting with Jiro “JJ” Masuda, coloring metal with Marilyn DaSilva, and pin construction with Marissa Saneholtz, to name a few.

All of my instruction inspired my work, but I think the most inspirational was something my friend Kathy Johnson taught me – water casting. I absolutely love to melt sterling and drop it into water, creating beautiful, organic shapes, and then using my imagination to combine those shapes with: pearls, gemstones, color, etc. This picture is of a water cast piece currently in development on my bench.

I joined MSG sometime around 2010, when I was a student; now I am a lifetime member. I’ve served on the MSG Board since around 2016, first as Art Fair Coordinator, currently as Treasurer. The interaction with other metals people is priceless! I am inspired and humbled by what my colleagues can do with metals and other elements.

I continue to make and sell my work, although I took most of the last 2 years off due to Don’s illness and death, and have only just begun to work again in the studio. I have hopes of participating in a couple of the MSG art fair booths this summer and maybe finding a retail establishment to carry some of my pieces.