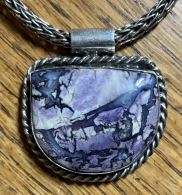 “So my name does not get mispronounced, it is Daniel (Dan) Wroblewski (row-bless-ski). Some may say I’ve taken a convoluted path to get to the place I’m at now. I was born, raised, educated, and currently live in Detroit and wouldn’t have it any other way. I am married to my high school sweetheart (Stephanie) and have one daughter (Danielle). After graduation from Cass Technical High School, I enrolled at the Art School of the Society of Arts and Crafts, now CCS. I started in the Industrial Design program, but discovered my true passion and switched into the Metals program in the Crafts Department under the tutelage of Mike Vizini.

I graduated in December of 1972 expecting to be drafted into the military with a lottery number of 4. I had already been given a one semester extension by my local draft board, using the logic that they would be getting a college graduate if they did. Literally dodging a bullet, the draft was abolished several weeks after graduation. Having made no plans after graduation (figured Uncle Sam was going to take care of that) I needed a job. I joined the Detroit Police Department in June of 1973. My art career was put on hold for the next 20 years, except a couple brief stints in the department’s Graphic Art Section.

I left the department in the winter of 1992, went back to school (Wayne State), and got my Art Ed certification. After completion of my certificate I landed an art instructor position with Birmingham Public schools teaching mainly metals classes to high school students. I needed to refresh my metalcraft skills so I returned to WSU and took a class with Phillip Fike. At Phillip’s suggestion I applied for the MA Metals program. Between working on my Master’s Degree and teaching I was back doing what I needed to do. Seventeen years later, upon retiring, I am now taking workshops and spending quality time in the workshop I built in my backyard.

Previously, if asked, I would have said raising was my favorite technique, but since taking three workshops with Michael Good, it is anything anticlastic. The best workshop I took is a tie between Heikki Seppa and Michael Good (same techniques, different scale).

I believe I’ve been a member of MSG for at least 8 years.

My favorite piece has yet to be made, but a close second would be either of the two chalices I made for my Master’s degree. These two chalices were chosen to be in Metalsmith Magazine’s Show In Print and several other shows (Black Male 13 and Reveler). Pictures included.

I call myself a hobbyist and do not sell my work. I often give it away to family and friends. It gives me great satisfaction to see someone I love wearing something I made. If I made something I felt was exceptional, I might consider entering it a local show.”