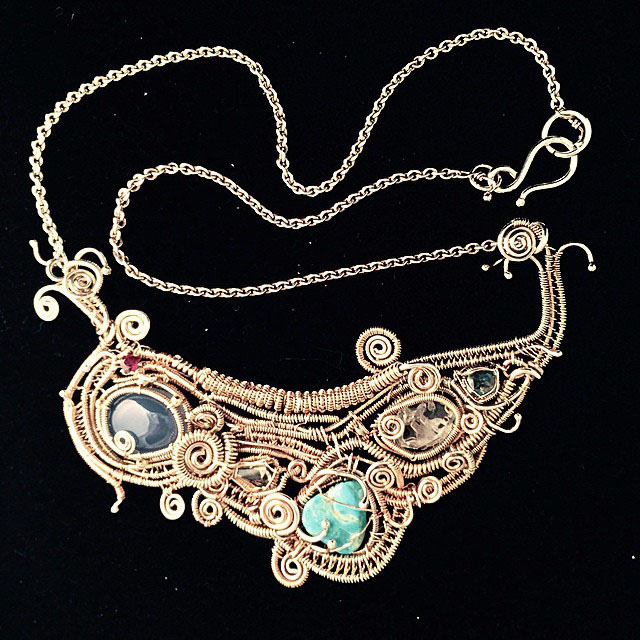 “After my aunt died a few years ago, my cousin sent some photos of her stuff, asking if anyone wanted anything. One picture was of my cousin’s hand, covered with rings, and among them I recognized my aunt’s wedding ring, a silver ring that she had made herself. My aunt and uncle had long been divorced and the ring put aside; my cousins didn’t realize what it was. But I remembered my aunt explaining how she had made it---and how amazed I was that a person could do that. And with that, I was hooked; making jewelry was what I wanted to do.

I was scoffed at when I announced that in a junior high school careers discussion. And then I got sidetracked with all the other interesting things to learn about. It wasn’t until many years later, married and after grad school and working, that I first took a jewelry class. It was at Greenfield Village, in a studio above the old watchmaker’s shop; one evening a week I got to drive into the village and take the class. I learned some basics--sawing, soldering, bezel setting and polishing---but most of the people there were tool and die types who liked things perfect and symmetrical, not like my freeform organic designs.

Then life took over again, and it was several years until I found myself home with two little children, and found jewelry classes at the Birmingham Community House with Robin Servo. When the Community House was remodeled in the mid-80s and the jewelry studio closed, I switched over to the BBAC and have been there ever since, with a variety of teachers—just about everyone who’s taught there.

There were some breaks. We lived in Japan for three years and I asked everyone I met about jewelry classes, and finally, a friend of a friend knew someone from the PTA---and I had a jewelry sensei. Once a week I went to his studio, and we bridged the language gap with dictionaries and sketches; my Japanese tutor learned a whole new vocabulary of metals and techniques to teach me. I learned some new things, although none of the traditional Japanese techniques; my teacher made western style jewelry.

Metalsmithing is just one part of my life. I’m a librarian, having worked in a corporate library, a school library and a public library. I’ve been a docent at several museums, most recently at the DIA for the past thirteen years. And I’m a volunteer tax preparer for theAARP Tax-Aide program. And now, I’m spending a fair amount of time grandparenting! (And not wearing any jewelry until my grandson is past the grabbing age.)

I’ve done different kinds of metalwork. I’m driven more by technique and what it can do, than by designing and finding the techniques to achieve it. So each piece is an experiment. Ask me which is my favorite and I’ll tell you it’s like children: they’re all my favorites. But I’m always pleased when I solve an engineering problem in an aesthetically pleasing way. About a dozen years ago, when the price of silver was high, I started working in copper and found it liberating; I was much more experimental and less concerned with getting it right the first time with no wastage. And those new ideas then found their way into silver pieces.

I joined MSG a few years ago after getting to know Mary Kernahan, who made it a welcoming place. I only sometimes sell my jewelry, at a few small fairs and some years at the BBAC Holiday shop. I don’t like doing production pieces; sometimes I’ll do a small series of similar pieces, but never enough to make selling feasible. And then it’s on to a new challenge.”