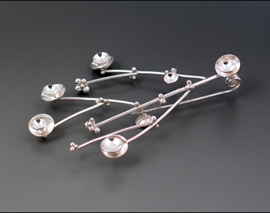 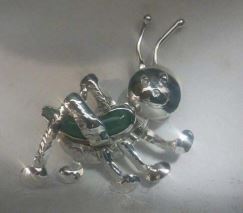 Danielle’s path to metalsmithing has been crooked, and self-guided. Her first attempt to get involved was around 1995 at the Norman Thomas Company in Birmingham. After a semester, she gave up and put her time into her live performances and studio recording again. She revisited her desire to learn and not fear a torch in the early 2000s with a filigree class— not exactly beginner territory. Metal clay project classes at bead stores led her to a very detailed class with Jiro Masuda and she held on for the ride. (She since has taken a similar weekend with him 2 more times and learned so much more.)

Somewhere after that first Masuda workshop and more project one-day classes, in 2009 she found MSG, joining as a board member and participating in the MSG Ann Arbor Art Fair activities as a demonstrator artist. She has served in various positions ever since.

If she had to choose a favorite class along the way, it would be the full semester at College of Creative Studies with Lesley DiPiazza. Lesley wrote a full and varied curriculum that forced knowledge of and mastery of specific techniques while having to create and integrate those concepts and skills into unique works. Another impactful 2-day workshop with Chuck Bruce and Micah Kirby incorporated her love of lapidary and really pushed aggressive soldering skills. Danielle is an eternal student who loves the process of pretty much everything she has experienced.

Some of Danielle’s favorite pieces represent tremendous troubleshooting and technique growth with minimal assistance. Her custom Snare Drum pendant in silver and 10k gold required intensive soldering of individual pieces (over 20) and a shell drumhead with hand carved drumsticks. A similar assembly and solder challenge was her custom order cricket convertible pin/pendant with a freeform green Canadian quartz cabochon body and repoussé legs and head.

Danielle has exhibited with Ann Arbor Art Center, U of M Hospital, Lake Orion Art Center and more. Her work has been sold through Mermaids on 30A in Panama City, FL, Lake Orion Art Center, and numerous art fairs and trunk shows. Currently, she is doing custom work by word of mouth as she looks for a way to remain active as an artisan. She is also saving every penny to return to the recording studio and finish a bucket list CD of original songs, appropriately titled “Chasing the Muse.”